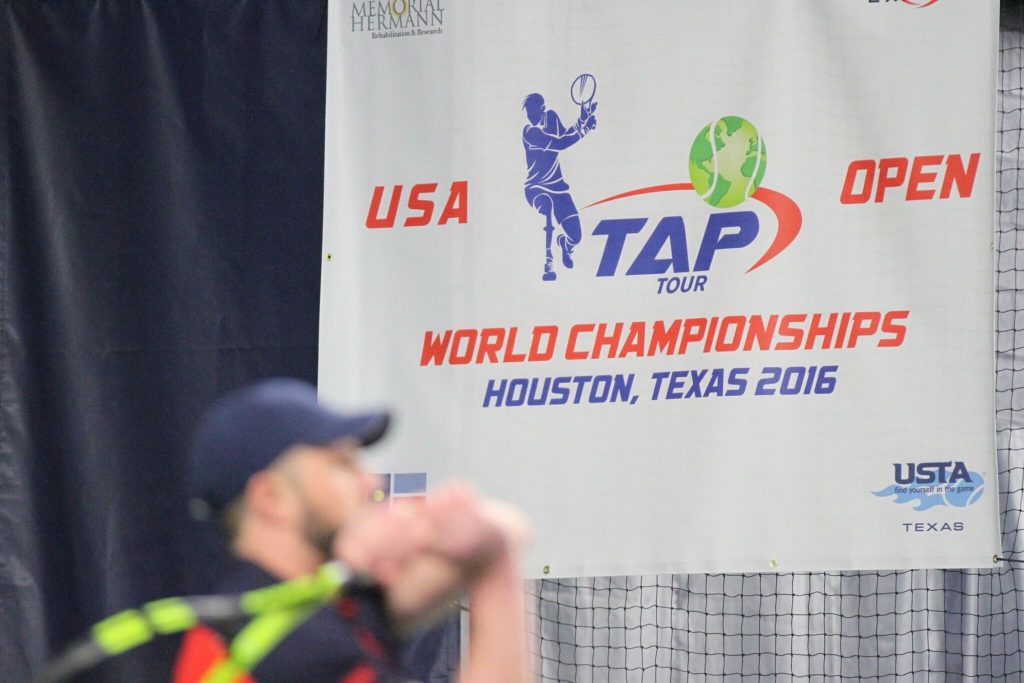 The Inagural USA TAP OPEN took place from Dec. 9-11, 2016 in Houston, Texas. The Tournament has now been held for Four Consecutive years, through 2019.

*This article has been retranscribed word for word as it appeared in Inside Tennis Magazine and on the World Wide Web until the USTA changed from sectional websites to a central website. During the process of transferring to a central website this article was lost. It is the history of some of the many who helped spark and pioneer a new modality of tennis. 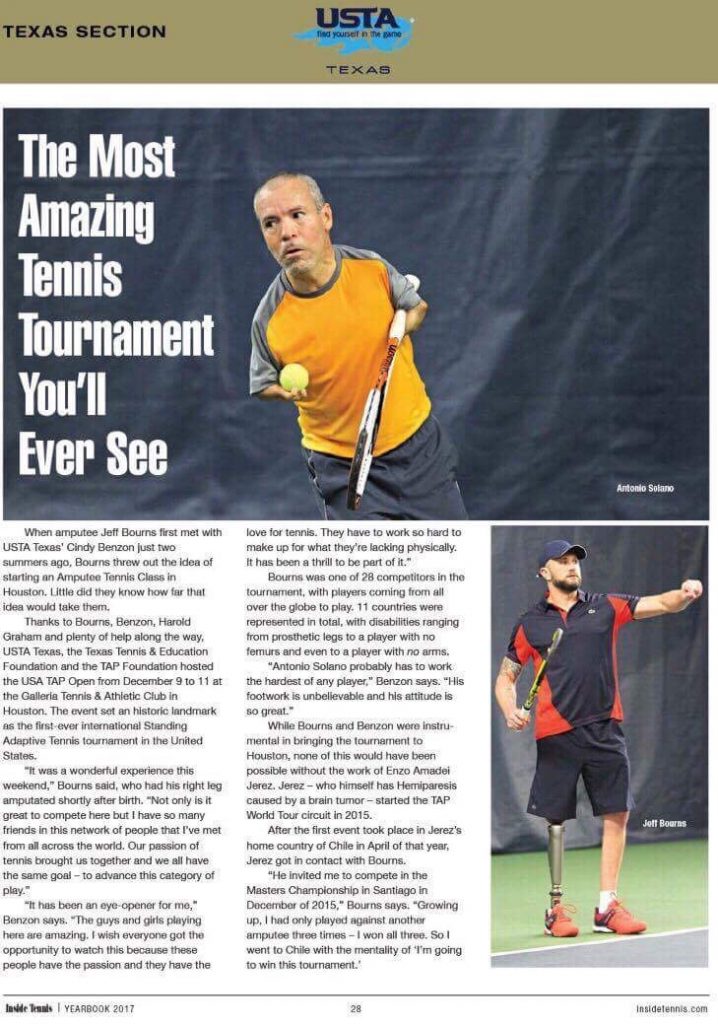 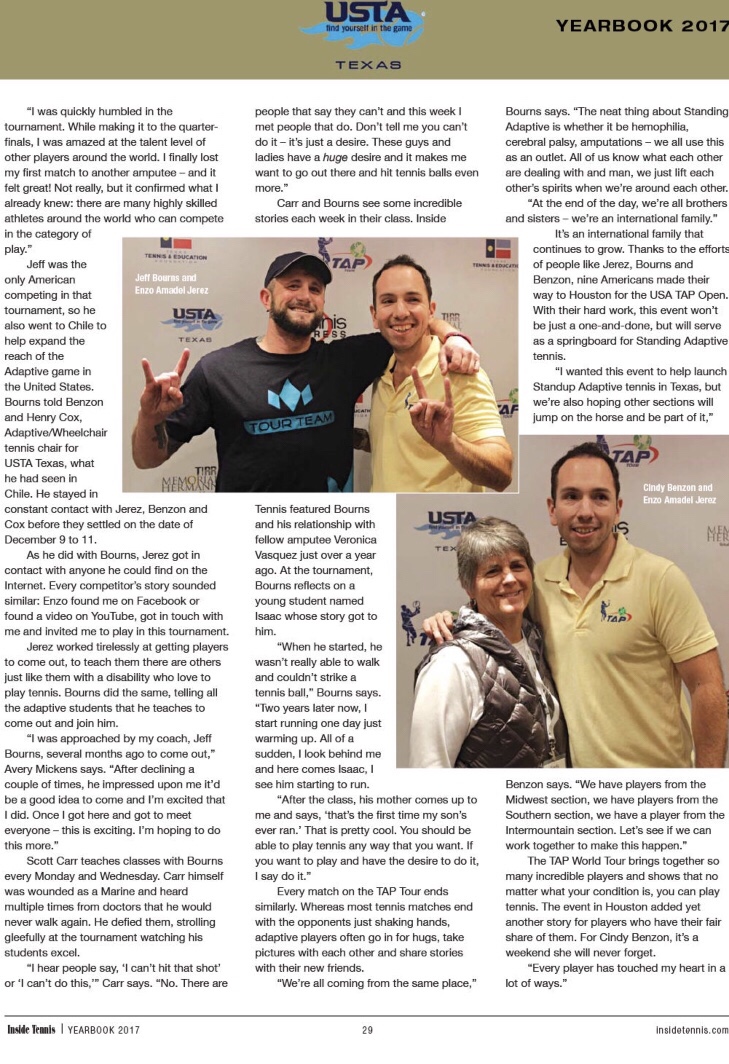 Featured in Inside Tennis Magazine 2017

When amputee tennis player Jeff Bourns first met with USTA Texas’ Cindy Benzon just two summers ago, Bourns threw out the idea of starting an Amputee Tennis Class in Houston. Little did they know how far that idea would take them.

Thanks to Jeff Bourns, Benzon, Harold Graham and plenty of help along the way, USTA Texas, the Texas Tennis & Education Foundation and the TAP Foundation hosted the USA TAP OPEN from December 9 to 11, 2016 at the Galleria Tennis & Atheltic Club in Houston. The event set a historic landmark as the first-ever International Standing Adaptive Tennis Tournament in the United States.

“It was a wonderful experience this weekend,” Bourns said, who had his right leg amputated as an infant. “Not only is it great to compete here but I have so many friends in this network of people I’ve met from all across the world. Our passion of tennis brought us together and we all have the same goal – to advance this category of play.”

“It has been an eye-opener for me,” Benzon says.” The guys and girls playing here are amazing. I wish everyone got the opportunity to watch this because these people have the passion and they have the love for tennis. They have to work so hard to make up for what they’re lacking physically. It has been a thrill to be part of it.”

Bourns was one of the 28 competitors in the tournament, with players coming from all over the globe to play. 11 countries were represented in total, with disabilities ranging from prosthetic legs to a player with no femurs and even a player with no arms.

“Tono Solano probably has to work the hardest of any player,” Benzon says. “His footwork is unbelievable and his attitude is so great.” 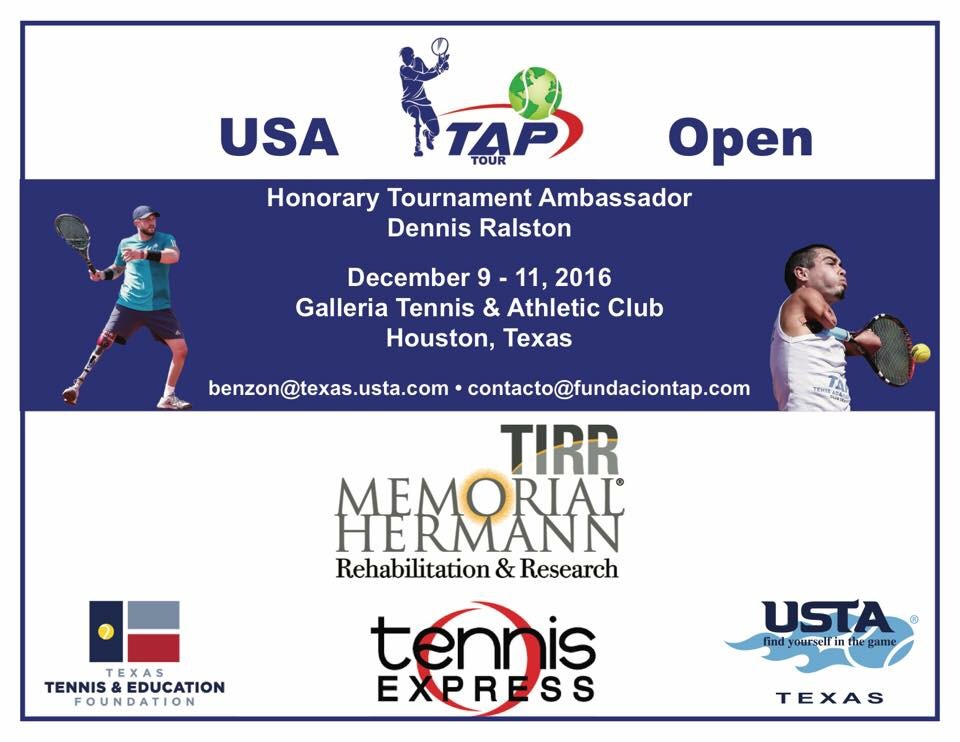 While Bourns and Benzon were instrumental in bringing the tournament to Houston, none of this would have been possible without the work of Enzo Amadei Jerez. Jerez – who himself has hemiparesis caused by a brain tumor – started the TAP WORLD TOUR circuit in 2015.

After the first event took place in Jerez’s home country of Chile in April of that year, Jerez got in contact with Bourns.

“He invited me to compete in the Masters Championship in Santiago in December of 2015,” Bourns says. “Growing up, I had only played against another amputee three times – I won all three. So I went to Chile with the mentality of I’m going to win this tournament!”

“I was quickly humbled in the Tournament. “While making it to the quarterfinals, I was amazed at the talent level of other players around the world. I finally lost my first match to another amputee – and it felt great! Not really, but it confirmed what I already knew: there are many highly skilled athletes around the world who can compete in the category of play.

Jeff was the only American competing in the Tournament, so he also went to Chile to help expand the reach of the Adaptive game in the United States. Bourns told Benzon and Henry Cox, Adaptive/Wheelchair tennis chair for USTA Texas, what he had seen in Chile. He stayed in constant contact with Jerez, Benzon, and Cox before they settled on the date of December 9 to 11.

As he did with Bourns, Jerez got in contact with anyone he could find on the Internet. Every competitor’s story sounded similar: Enzo found me on Facebook or found a video on YouTube, got in touch with me and invited me to play in this tournament. 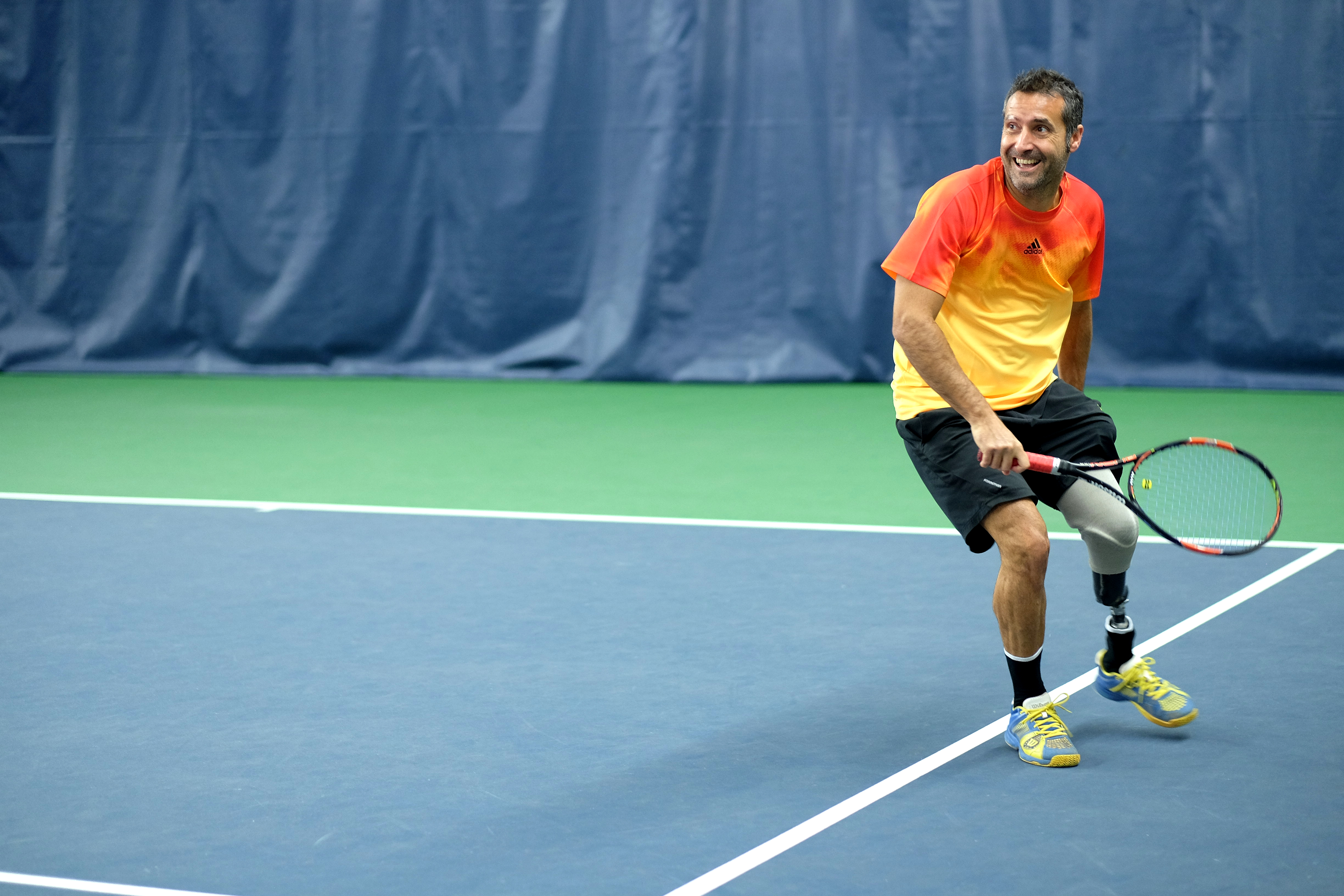 Ivan Corretja is all smiles on the tennis court. Photo Credits – Justin Tzou

Jerez worked tirelessly at getting players to come out, to teach them there are others just like them with a disability who love to play tennis. Bourns did the same, telling all the Adaptive students that he teaches to come out and join him.

“I was approached by my coach, Jeff Bourns, several months ago to come out,” Avery Mickens says. “After declining a couple of times, he impressed upon me it’d be a good idea to come and I’m excited that I did. Once I got here and got to meet everyone – this is exciting. “I’m hoping to do this more.”

Scott Carr teaches classes with Bourns every Monday and Wednesday. Carr himself was wounded as a marine and heard multiple times from doctors that he would never walk again. He defied them, strolling gleefully at the Tournament watching his students excel.

“I hear people say, “I can’t hit that shot’ or I can’t do this,” Carr says. “No. There are people that say they can’t and this week I met people that do.” Don’t tell me you can’t do it – it’s just a desire. These guys and ladies have a huge desire and it makes me want to go out there and hit tennis balls even more.”

Carr and Bourns see some incredible stories each week in their classes. Inside Tennis featured Bourns and his relationship with fellow amputee Veronica Vazquez just over a year ago. At the Tournament, Bourns reflects on a young student named Isaac whose story got to him.

“When he started, he wasn’t really able to walk and couldn’t strike a tennis ball,” Bourns says. “Two years later now , I start running one day just warming up. All of a sudden, I look behind me and here comes Isaac! I see him start to run.

“After the class, his mother comes up to me and says, “that’s the first time my son’s ever ran,” That is pretty cool. You should be able to play tennis any way you want. If you want to play and have the desire to do it, I say do it.”

Every match on the TAP Tour ends similarly. Whereas most tennis matches end with the opponents just shaking hands, Adaptive players often go in for hugs, take pictures with each other and share stories with their new friends.

“We’re all coming from the same place,” Bourns says. “The neat thing about Standing Adaptive is whether it be cerebral palsy, amputations – we all use this as an outlet. All of us know what each other are dealing with and man, we just lift each other’s spirits when we’re around each other.

“At the end of the day, we’re all brothers and sisters – we’re an international family.”

It’s an international family that continues to grow. Thanks to the efforts of people like Jerez, Bourns, and Benzon, nine Americans made their way to Houston for the USA TAP OPEN. With their hard work, this event won’t be just a one-and-done, but will serve as a springboard for Standing Adaptive Tennis.

“I wanted this event to help launch Standup Adaptive Tennis in Texas but we’re also hoping other sections will jump on the horse and be part of it.”

The TAP World Tour brings together so many incredible players and shows that no matter what your condition is, you can play tennis. The event in Houston added yet another story for players who have their fair share of them. For Cindy Benzon, it is a weekend she will never forget.

“Every player has touched my heart in a lot of ways.”

Original INSIDE TENNIS Article Below

Share on FacebookShare on TwitterShare on Linkedin
Posted in Amputee Tennis