September 11, 2019 / Jeff Bourns / Comments Off on Adaptive Standing Tennis in the United States
Share on FacebookShare on TwitterShare on Linkedin 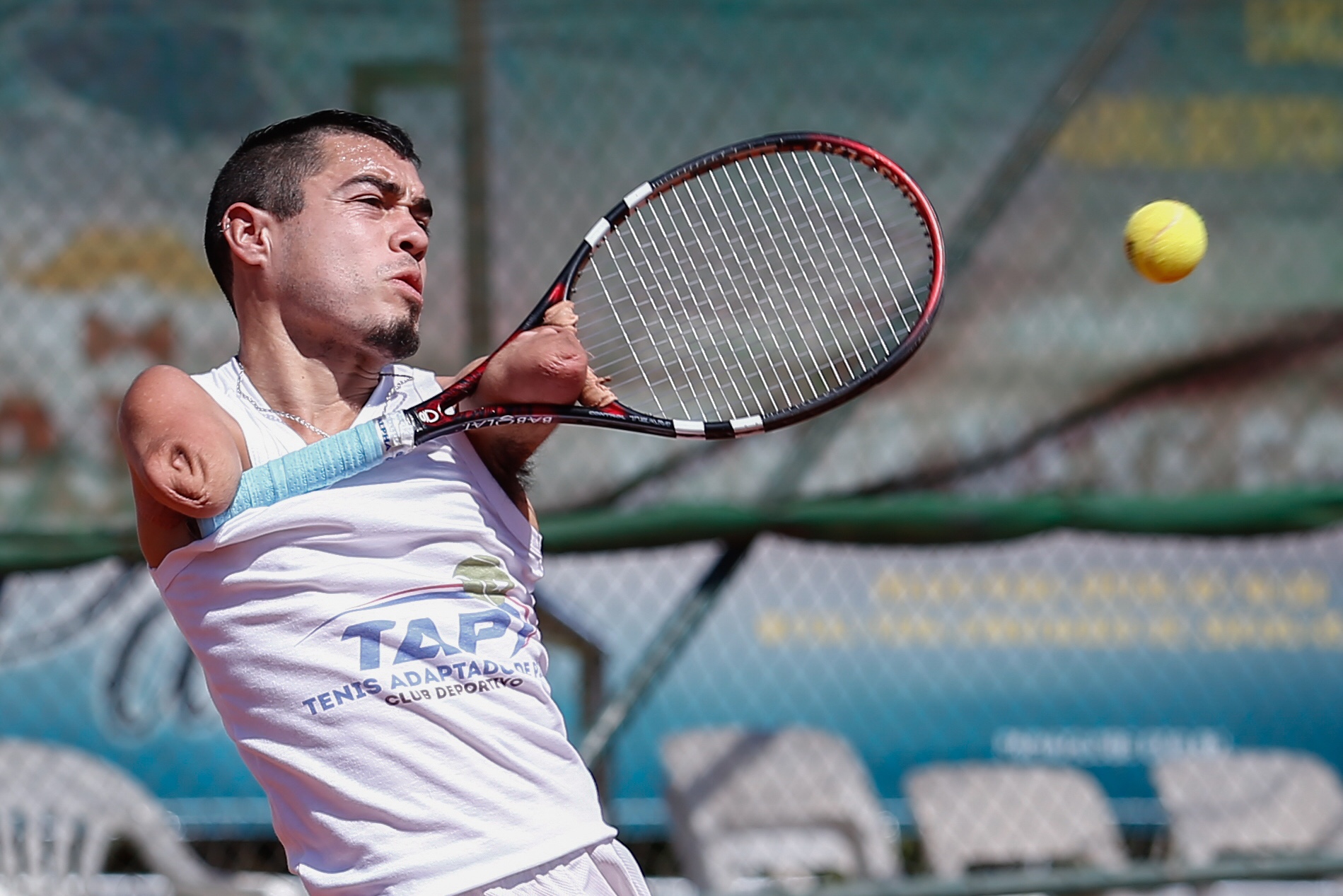 While numerous individuals who could qualify for this category of play in their respected countries have been playing tennis for decades, the category really began to gain traction in Chile. The TAP Foundation helped jumpstart a more organized effort and interest worldwide. Currently, several continents and countries are experimenting with their own sets of rules and through trial and error continuing to grow this grass roots movement. It is important to note that each country or entity involved may have their own rules, however, in the global effort of sanctioning this category the importance of communication and compromise between countries in hopes of future unification of rules. 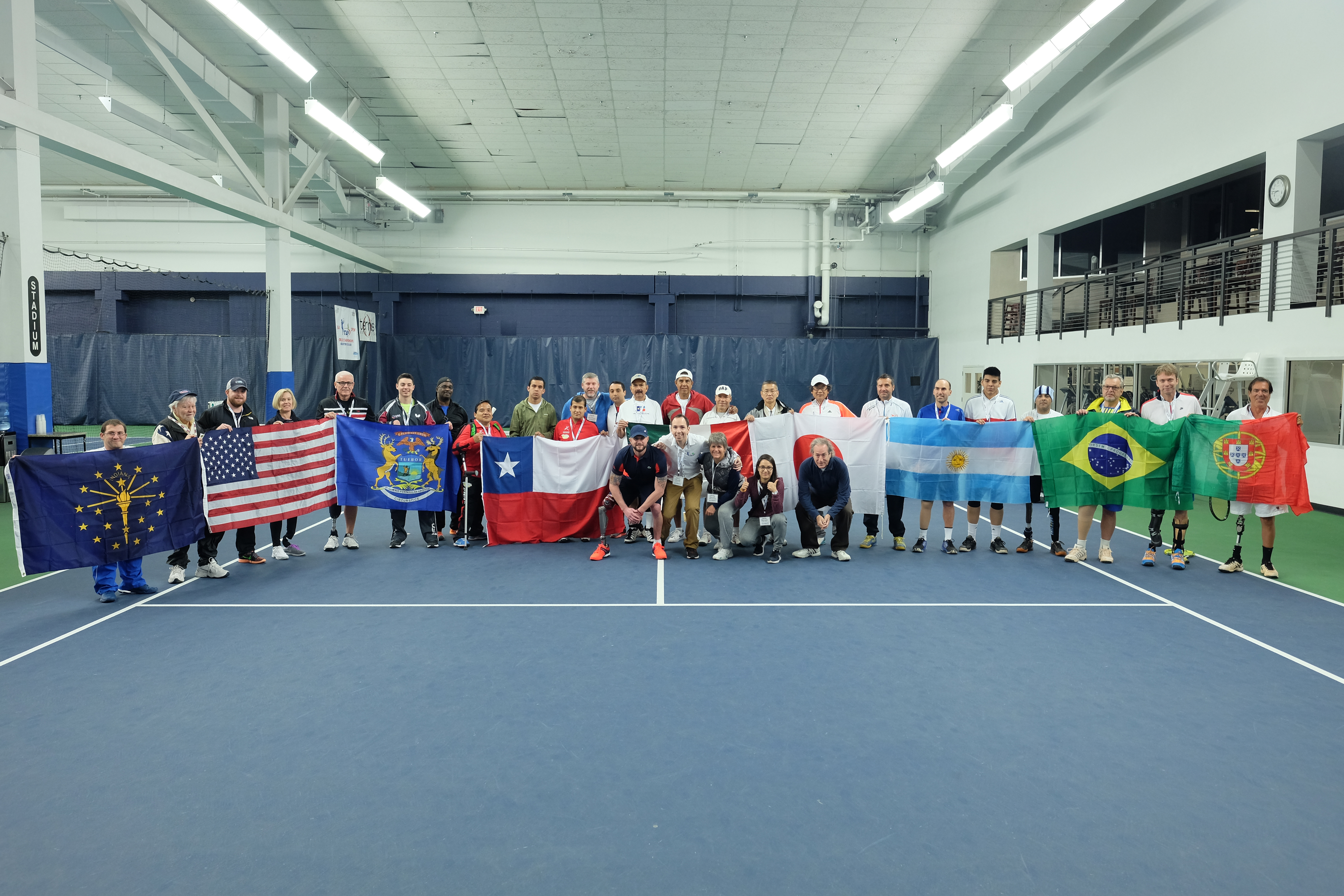 The United States really entered our first year and attempt at ways to grow the game on a more National scale this past year. Tournaments were held in Greensboro, NC by Carolinas Adaptive Standing Tennis Association (CAST), in Indianapolis and at Michigan State University by the Midwest. Still slated to take place in 2019 are Tournaments in Arizona and Houston. The average turnout or participation rate has been 8-12 players each Tournament. Prior National history includes First Volley Clinics held in different cities by OPAF (OPAF hosted a tournament as well), an Adaptive Standing Tennis program started in Houston in 2014, an International Adaptive Standing Tennis Tournament held in Houston in 2016, Program and Team (Full Metal Racquets) created in San Antonio in 2017 by SAAF, as well as a Tournament held at Purdue University by the Midwest.

In 2018 at the third annual USA TAP OPEN there was an opportunity for a large congregation of American players to discuss how to better service and grow our category of play in the United States. The consensus from that meeting is as follows. *Americans want to play longer matches. The present format was one set to 6 games, Ad, and tie breaker. During semi-final and final matches the format would change to best 2 of 3 sets. The new format would include all matches best 2 out of 3 sets, no ad, and a tie breaker. *Americans wanted to incorporate a 2 bounce rule in certain categories (breakdown of categories listed below) to accommodate individuals with challenged mobility but can still qualify to play. *Americans would like to create their own ranking system within the United States. *Americans would also like to have the option of adding doubles to Tournaments.

Categories to Consider during evolution Model Based on Mobility

A1– Single Below knee Amputee. Mild CP. Examined by medical diagnosis and movement/strength for placement. (K4) *Upper Extremity until there is a larger player pool in this area.

A- Single Above Knee and bilateral below knee. Above Extremity/Smaller arms. Tono and Nico pictured above could be placed in this category. Moderate CP. Examined by medical diagnosis and movement/strength for placement (K3-K4)

All traditional tennis rules apply to category A . (Regular tennis ball and one bounce)

B- Entry introduction level for all who cannot move well but wish to advance.  (examined by medical diagnosis and movement/strength for placement) K1-K2 *allowed 2 bounces.

Category B is two bounces. Only difference in 2 categories.

• Below Knee amputees use 35% more energy in movement than an able bodied individual.

• Above knee amputees use 75% in movement than an able bodied individual.

• K level is a rating system for amputees that can either indicate an individuals potential for rehabilitation or current activity level. The greater the K level the more active or athletic the individual is. Highest being K4.

Obstacles in Growth  So far it seems that the main obstacles that stand in the way of growth and development include funding for players to be able to travel to different tournaments, work and school schedules, and lack of communication between sections and organizations within the United States. Funding and financial constraints seems to be the greatest. While a common theme in adaptive sports, right now it is more difficult for us when it comes to travel to compete in Tournaments due to the fact that we are unsanctioned and unable to apply for certain grants or receive additional funding within the tennis community. A possible way to offset this issue would be creating an organization or piggybacking off of an existing organization to raise money for players to travel and compete in the United States. Also, while there are a few programs currently being offered around the United States, it is difficult to keep a consistent participation level in these programs. The problem seems to be not having enough related local events or activities for the participants to take place in outside of practice. A solution to this would be to encourage students to enter into local able bodied tournaments and leagues. Even introducing them to wheelchair tennis so the individual has options and more choices.

Growing Adaptive Standing Tennis
Moving forward some things to consider are as follows. Keeping focus on development and growth in the United States. We need to create a set of rules that most everyone can agree on. In any game you play, the first thing always addressed and taught to new players are the rules of the game. Overtime these rules will evolve as we do. By rules I am not only talking about different categories and one or two bounces. We also need to consider other rules such as equipment time outs. As an example, in wheelchair tennis when part of the chair breaks there is a set amount of time to diagnose and repair. In our case it would be an issue with our prosthesis or orthotic device. From changing a foot to making changes to a prosthetic knee, how much time should we be allowed during a match if something breaks. To prevent skin breakdown, maybe even implementing a thirty second to one minute time out to remove sweat from your residual limb/nub/amputated leg. Do we change compression of the tennis balls when first teaching new amputees who have played tennis before? It is important to move under control on the tennis court to prevent injury. As in wheelchair tennis and able bodied tennis we need to create a pathway where if new players start at set point A there are steps and a process forward of advancement to play at higher levels to set point Z if they qualify.

Next Steps
We should consider creating an organization or community for players and organizers who can commit to being leaders and helping growth and development in their communities outside of Tournaments. These individuals would play a critical role in problem solving information proposed and as a team figuring out other ways to grow the game. Not only just as players but organizers and consultants who have particular knowledge of importance in certain niche areas. Hopefully these individuals can be compensated for their involvement and accredited for their contributions. In gaining participation most individuals who qualify to play in this category are part of social groups or organizations or have friends whom might have the same physical challenges as they do. Perhaps by hosting fun social tennis mixers using their network new participants will be interested and enjoy playing tennis. Many individuals who can qualify to play as well already play in able bodied USTA leagues across the United States. Other future participants can be found by disseminating information to prosthetic/orthotic companies, physical therapy clinics, local community centers that have adapted sports programs, as well as organizations that support individuals with challenged mobility.

It is very important to note the United States Tennis Association (USTA) fully supports what we are trying to do right now. At this time they just do not have the “leg power” to be of more assistance.

Next year JASTA will be hosting an International Tournament in Tokyo 2020 prior to the Olympics and Paralympics to raise global awareness for Adaptive Standing Tennis. Looking into the future it would be great if we could have greater participation, organization, and blueprint in place to have a similar Tournament in the United States 2024.

Share on FacebookShare on TwitterShare on Linkedin
Posted in Uncategorized